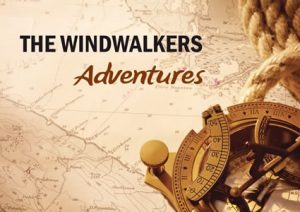 Adventure, a yearning, that is not satisfied by the daily routine. The hunger of new experiences, new lands, new traditions. The Windwalkers crystallized exactly that with his music: a little bit adventure and a lot of south america for the daily grind. The album is ennobled by the participation of the Latin-Jazz-Icon Grammy-awarded  trombone player Joe Gallardo.

With his third album “Adventures” sketched “The Windwalkers” his musical path since the album „La Guagua“ (2014, Mons), acclaimed by Tony Lakatos:
„This CD is the proof again, that good music is international. In this band “The Windwalkers” meets five talented young musicians from Europe with the Colombian bandleader / percussionist Mario Maradei Gonzalez and creates Latin jazz on the highest level.“

What makes the sound of the band is the international character of the band itself. Along with the Colombian Bandleader Mario Maradei Gonzalez embosses trumpet player Marc König, saxophonist Fabian Schöne and drummer Franz Eichberger from Germany, as well as the piano player Laszlo Szitko from Hungary and the bassist Neo Stephanou from Cyprus the sound.
This mix of nationalities represents the influences that makes possible this enormous style bandwith. There are elements of Latin, Afro and Cuban music that intertwine playfully with the common mother tongue “Jazz”.
“Adventures” is about experiences, landscapes and journeys, whereby each one of the ten album tracks open up a new chapter. The album title derives from the track “Adventures of Timba” and abducts us with a lot of temperament in the Latin american Rain Forests. A labyrinth of Latin american rhythms and fascinating brass solos. “Surfar no vento”, “Mosquito en Mojito” as well as the song “Nomatú” from Joe Gallardo leaves us traveling furthermore in our thoughts around south america.

Afterwards we go with “Dirty Harry” Callahan-like to north America in a cinematographic search of a Murderer. Last station of the trip “Fast Help” pulsates and drags us in the night life of a big city, a night where everything can happen.

To the Amazon Store….
To the iTunes Store….